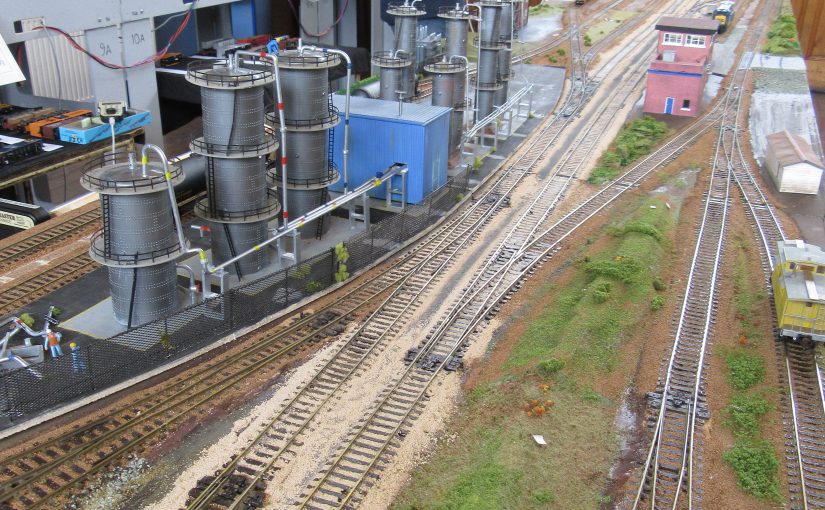 HO scale (3.5mm / foot). DCC Gaugemaster Prodigy Advance ™ with up to 4 cabs in use. Analogue control of switches (points) and remote uncouplers.

This  freelance layout is nominally based on Youngstown Ohio, USA. It is a large continuous run layout, designed for operator and viewer interest. It incorporates 3 areas where switching (shunting) takes place, plus a main line which showcases impressive block trains and passenger services. It is mostly based on the Chesapeake and Ohio (C&O) system, but with a considerable amount of modeller’s licence.

Set in the late 1960’s to early 1980’s, we run a wide range of locomotives and rolling stock from a variety of railroads, with many different liveries on show.

Having chosen the location at random, we then learnt that the real Youngstown had many miles of freight sidings, at least 6 different railroads (some narrow-gauge), 3 or more steel-works and many other related industries either supplying the steel industry or using its by-products. During the period modelled, it also had major problems with organised crime, corruption and pollution. Diplomatically, we chose not to try to model all of these latter three aspects. The first version of the backscene (plain dark grey) was probably not too far from the atmospheric conditions of the time!

Clearly the size and scale of the prototype presented a dilemma, which we solved by deciding not to try to make a representational model, but rather to give the flavour of American railroading. We chose a North American prototype because we knew nothing about it, seeing it as an opportunity to learn something new. Most members of the Team have UK-outline layouts at home, so this is quite a change.

This is a large layout, as can be seen in the following image, taken at one of our annual Open Days-

We have a dedicated track and loading ramp for TOFC (Trailer on Flat Car (Piggy-back)) services, which run as high speed priority freight traffic (so-called “Hot-shots”).

Seeing one of our long block coal trains of up to 30 x 100ton hopper cars running through the passenger depot (station) and past the industrial areas and classification yard makes quite an impression. Even this is a poor shadow of the real thing, where trains 2 miles long are common!

Freight and passenger trains have to recess (take a loop line) in order to pass on the single-track main line.

We have a variety of industrial locations and activities to justify meaningful switching movements, including a chemical works and warehousing. One switcher (shunting locomotive) is used in each of the Industrial and Classification yards. Overall it means that there is almost always meaningful movement on the layout, and frequently at least two things happening all the time. We think that this is important as part of the performance aspect of exhibiting is to entertain our visitors.

Thanks to the range of skills in the Team, we have been able to learn a lot from each other, as well as

We have not tried to model the C&O signalling system, mainly because no-one here can understand it. From what we have learnt about grade signals, siding signals, train order systems, CTC (Centralised Train Control) and authorities for trains to pass signals at red subject to direction of travel and weight of train, and all the rest, it is all too confusing. So, if you can explain this subject, please come and enlighten us!

This YouTube video shows one of our early working sessions, when we were track laying-

The Team  discussed how well the layout was meeting their expectations in terms of frequency of operation. A number of ideas were considered to help us to put the layout up, run it and take it down more speedily. The Team agreed that they needed to operate the layout more frequently at the Club. Accordingly, it was decided to construct one additional board so that the four of the front boards could be added to the new board on a Club night and operated in an end-to-end configuration. The new board was completed by February 2018, and running sessions should be more frequent from now on.